All gateways and facilities of the Amsterdam Airport Schiphol are located under a roof of the single terminal constructed in 1916, that represents the famous AMS construction plan or its ‘one-terminal’ concept. The Schiphol Plaza acts as a central hub not only for the departure and arrivals halls but also for the shopping center and a railway station.

There are 3 separate halls with 6 piers, all of those are connected with each other so that the passengers could get from one hall to another by feet. The exception is the Hall M, once passenger passes the security control, they can not reach other halls anymore. Moreover, the Schengen and Non-Schengen zones are separated. 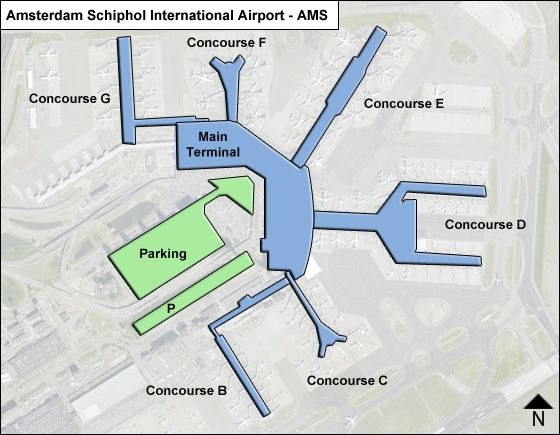 The terminal itself acts as an entertainment and tourist attraction center. The one may find here the large shopping center at the Schiphol Plaza, an open-air observation area at the rooftop of an airport, or the national aviation museum Aviodome opened in partnership with the Rijksmuseum. In 2015 the airport built the hotel ‘Hilton Amsterdam Airport Schiphol’ for its passengers to stay in, it has 433 rooms and 41- meter- high ceiling made of glass, also the hotel provides a direct connection to the terminal.

The main source of revenue of the airport is international activities provided, parking fees, rent charges, property development and retail charges. In 2010 the airport revenue has reached 1 180 million euros, meanwhile, the total shareholders' equity was equal to around 3 109 million euros.

The AMS has announced its plan for the future expansion and construction of the new Pier A which will have 11 gated and will be located in the Departure Hall 1. With the investment of around 500 million euros, the project shall be finished by 2023. Moreover, the new Departure Hall is planned to be built, the direct access to the Schiphol Plaza will keep up with the trend of the ‘one-terminal' concept. It will serve both departures and arrivals for flights within Europe. That would also allow the airport to increase its capacity to over 14 million passengers annually.

Terminal has three separate levels with arrivals and ground transportation at the Ground level, check-in and departures at the Second level and access to VIP lounges and gates D, E, and F at the Third level.

Among the services available at the territory of an airport, the one may find nursery, service center, medical center, banking facilities, casino, spa, and sauna, lost & found, lockers, baggage storage, supermarket, cafes and shops, information desks and many more.